The year so far has been dominated by arguably the most serious geopolitical event since the 1962 Cuban Missile Crisis. The threat of a pre-emptive nuclear strike was made recently by senior Russian officials, posing the first serious possibility of the deployment of such weapons since the stand-off between the US and the Soviet Union in the early sixties.

Add to this rising inflation, stretched valuations, and a reduction in stimulus and the stage was set for increased volatility.

Global stock markets plummeted as they attempted to gauge the impact of war in the Ukraine. Some of these losses were recovered as the quarter progressed with the MSCI World Index, the S&P 500 Index, and the Bloomberg European 500 Index all ending down by around 5 percent since the start of the year. 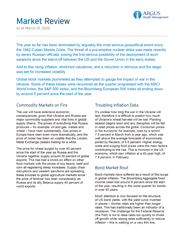 The war will have extensive economic consequences, given that Ukraine and Russia are major commodity suppliers and vital links in global supply chains. The prices of everything that Russia produces – for example, oil and gas, metals and wheat – have risen substantially. Gas prices in Europe have risen even more dramatically, and the price of nickel has been so volatile that the London Metal Exchange ceased trading for a while.

The price for wheat surged by over 40 percent since the start of the year as Russia and the Ukraine together supply around 30 percent of global exports. This has had a knock-on effect on other food markets with the prices of soy beans, beef and corn all registering steep increases. Supply chain disruptions and western sanctions are spreading these troubles to global agriculture markets since the price of fertilizer has risen considerably as Russia and its ally Belarus supply 40 percent of world exports.

It’s unclear how long the war in the Ukraine will last, therefore it is difficult to predict how much of Ukraine’s wheat harvest will be lost. Planting season begins soon and any disruption will be felt in retail prices across the globe. Consumer prices in the eurozone, for example, rose by a record 7.5 percent in March from a year ago, which was well above the average forecasts of economists, polled by Reuters, of 6.6 percent. Higher energy costs and surging food prices were the main factors contributing to the rise. This is mirrored in the US economy, which saw inflation at a 40-year high, of 7.9 percent, in February.

Bond markets have suffered as a result of this surge in global inflation. The Bloomberg Aggregate fixed income index lost around 6 percent since the start of the year, resulting in the worst quarter for bonds in over 40 years.

Much attention is now focused on the structure of US bond yields, with the yield curve inverted in places – shorter rates are higher than longer rates. This has traditionally been an indicator of a recession. The challenge for the Federal Reserve (the Fed) is not to raise rates too quickly to choke off growth while raising rates sufficiently to reduce inflation – this is walking on a very thin line.

All other things being equal, one would expect the current high level of geopolitical uncertainty to cause a capital flight towards the security of US Treasury bonds. The problem is that other things aren’t equal, with tightening US monetary policy, and now, the danger that inflation escalates further, seriously sapping demand for US debt.

The extent to which this global uncertainty continues is driven by the motivating factors of the major players involved.

It is true that Russia has issued repeated warnings regarding Ukraine joining NATO, though it’s extremely unlikely that President Putin actually feels that the NATO countries constitute a military threat to (nuclear-armed) Russia. These comments, though officially directed at western leaders, are likely intended for the ears of the Russian population. The propaganda message is very simple: the bigger the (perceived) threat from the West, the more the Russian people need him as protector.

Not wanting Ukraine to join NATO is likely an excuse for the invasion, rather than a reason. The threat to Putin’s dictatorship is not military, but potential unrest from the Russian population. In this respect, Putin will perceive the so-called “color revolutions” in Eastern Europe as a massive existential threat to his regime. Recently, we saw the beginnings of one in Kazakhstan. Before that was Belarus, and of course prior to that, the Ukraine itself showed active resistance. The last thing he wants is for any of these countries to actually succeed, turn into thriving liberal democracies, and for that message to spread throughout the Russian populace.

The biggest impact economically that the global uncertainty has posed is to disrupt commodity production and supply chains, causing inflation. This creates a toxic climate for fixed income. As rates rise, bonds become a more attractive alternative to equities. Despite the need to maintain growth, central banks are likely to continue to normalize monetary policy, having extended emergency levels of support during the pandemic. This is the equivalent of swimming upstream.

It is unclear how long the war will last or whether the geopolitical tensions will spread. Europe needs to unwind decades of Russian energy dependence and rebuild military capability. The implications of the war are more serious for Europe than they are for the US, given its relative reliance on Russian energy exports. European stocks may be more subdued than their US counterparts while this conflict drags on. For all investors, the next few months will be a bumpy ride.